The Red Cross has a scattered history. From being discussed by Clara Barton and Walt Whitman in parlors of Chatham Manor in 1862 to being implicated in sex trafficking after the Haiti earthquake in 2017 the Red Cross has been championed and decried by all kinds of people. However, this organization’s development throughout Europe includes strange origins.

In the Edwardian Era, Peter Pan author J.M. Barrie and Methuen Publishing editor E. V. Lucas embarked on creating a children’s charity home in France. In 1915, E.V. Lucas’ only daughter Audrey Lucas found herself in a rural French house, bathing ten French orphans a day and helping her mother manage a grassroots charity. Mrs. Elizabeth Lucas chose to leave an  upper-class England life and travel to a warzone in France in 1915 to help children, with money from J. M. Barrie, seemingly blind to all risk. Especially since Mrs. Lucas was ill in 1915 and her daughter Audrey Lucas had an appendectomy that year and couldn’t travel for months.

According to Barrie’s official biographer, who wrote the only detailed account of why an Edwardian matron would up and leave England during a world war, Barrie was so haunted by scenes of injured French children he would discuss it at length with his friends. The Scotch playwright pored over these scenes with Mrs. Lucas and seeing “the strength of her sympathy, asked her if she would go out there and prepare, at his own expense some kind of organized  refuge or home.” According to Barrie’s biographer Denis Mackail, Mrs. Lucas “hardly hesitated”. This is hard to believe, especially since Mrs. Lucas was sick in 1915 and had a precocious teenage daughter still in school. Mrs. Lucas expended a great deal of effort at the  behest of Barrie, who wrote a £2000 cheque (a value of over £207,000 today) for the effort and accompanied it with a letter from Sir Edward Grey to the British ambassador to France. It is  unknown whether Mrs. Lucas spoke French or had any medical training. She was left on her own to buy supplies for this “organized refuge” near Rheims, France in the middle of a war. According to Mackail, the first patient at this refuge, known as Chateau de Bettancourt, was a baby. Strangely, Barrie’s other friends managed to get to Chateau de Bettancourt during the war including E. V. Lucas and Turley Smith “as a kind of orderly”. Turley Smith wrote stories for  schoolboys and had seemingly no medical training. Years later, Barrie’s ward Nico Llewelyn Davies recalled Turley Smith was one of Barrie’s best friends. In the memoriam book Dear Turley (1942), with reminisces to the life of Charles Turley Smith, a photograph of Mrs. Lucas outside Chateau de Bettancourt in 1916 is printed. According to Dear Turley, Audrey Lucas only went to the warzone hospital during her school holidays. However, in her biography of her  father, it seems like Audrey was at Chateau de Bettancourt continuously from 1915-1916.

That prettiest of the flora and fauna of Roman Catholic countries, a first communicant in her radiant and spotless attire — from white shoes to white veil and crown of innocence over all….In the spring of 1915 it was my fortune not only to know personally a bouquet of these eager little French pietists but to be present at their premier communion. There were six little girls in all, and I saw them pass into safe keeping of their new mother, the Church of Rome, and in visible token receive from officiating hands a pictorial certificate so chromatically violent that it could not but satisfy my childish eyes and under conditions of emotional excitement, must ever remain a symbol of their consecration……the priest came to each girl with much the same tender precision and ecstasy as fastidious and enthusiastic collector to the choicest porcelain.

Barrie humbly bragged about Chateau de Bettancourt in his letters to actresses stateside. Barrie was a playwright and was in contact with major actresses of the time for his plays. Maude Adams, who played Peter Pan on stage for the first time in the United States in 1905, was a particular favorite. In 1916 Barrie wrote to Broadway sensation Adams, “I sometimes go over to France to a hospital I have for French children wounded in the war. I think it is the only one  there is. It is near Verdun, and so in the thick of excursions and alarms. Some of the children,  there are about 90, have lost limbs, others are just destitute, but even they are gay, even war can’t  prevent that.” It is not clear how Barrie managed to occasionally travel near Verdun, France in  the middle of World War I to a hospital he indicates is his. However he did, and when he visited  he would “tackle the children” there. It is possible that Barrie is shown in the Chateau de Bettancourt photograph from 1916, on the far right wearing a white armband. 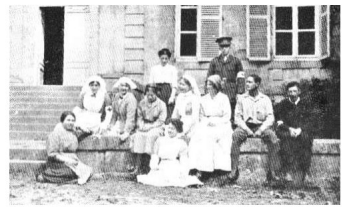 Barrie also managed to send money to this endeavor, buying the refuge a car and sending quantities of cigarettes for French soldiers who camped out in the building’s stables. Mrs. Lucas managed to enroll at least sixty patients for the refuge from its start in 1915.

Near the Chateau de Bettancourt, in Verdun, the American Field Service “AFS” started operations in 1915. The Red Cross mixed with the ambulance driver groups like the AFS in Europe at the time, including the American Volunteer Motor Ambulance Corps which transported wounded during the 1916 Battle of Verdun. The Red Cross was not heavily involved in France until after 1915, as the organization then had enough domestic support with over 3000 chapters in the United States to expand outwards. In October 1917 the American Red Cross worked with the U.S. Army to establish hospitals across war-torn France. One such hospital, Base No. 38 with its entire inventory of equipment shipped from Philadelphia, Pennsylvania operated from 1917-1919 in Nantes, France.

The Red Cross was not the only charitable endeavor dedicated to children Barrie or Elizabeth Lucas was involved in. According to Barrie’s ward Nico Llewelyn Davies, Mrs. Lucas was the person who advocated that Barrie give the rights of Peter Pan to the Great Ormond Street Hospital. The Llewelyn Davies boys, Barrie’s wards, did not expect Barrie to part with the rights (or income) from Peter Pan in this way. Barrie gave the London hospital the Peter Pan rights in 1929, eight years before he died. The Great Ormond Street Hospital boasted an impressive pedigree in the Edwardian era. Prince Edward himself, later King Edward VIII, was the president of its board. So if Mrs. Lucas encouraged Barrie to make such a gift, one wonders  what connections she had to Great Ormond Street Hospital.

Barrie’s relationship with the Red Cross lasted for years. He was involved in the Red Cross after World War I ended, as his letters printed in newspapers in 1918 include public appeals for Red Cross funding.

From boasting of his child hospital to Maude Adams in 1916, to evidence uncovered indicating he changed a woman’s will to attain guardianship of the five Llewelyn Davies boys in 2009, more and more questions have been raised about Barrie’s motivations towards young children. The Red Cross may play a role in this uncovering of the truth, due to its oversight of many hospitals with young children in France and across the globe.